I wrote this post in January and never posted it!

I did #21 twice. The first time I only used two colors (black and white), because that’s how many colors Nadia (YarnUtopia) used. After I finished, I thought that using only two colors didn’t show all the various stitches and texture to its greatest advantage, so I did it again in pink, purple and blue. Much nicer. 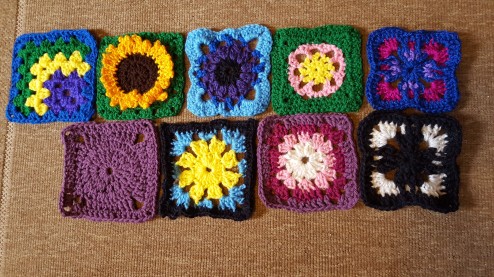 They are the two on the ends of the rows.

Of course, #17, the sunflower, is my favorite of this group. Very 3D and just fun.

I have also learned, after doing the black and white one, that I don’t have to use the oldest rattiest scraps of yarn I have. Yes, this is supposed to be a “use your scraps” project. The thing is, I don’t have that many leftover scrap balls of yarn from my (nonexistent) previous projects. So I’m throwing off the “scraps only” restraint and using whatever yarn I want. You can get three skeins of sparkle yarn at Walmart for about $9. A little bundle of happies for barely more than a movie.

Now, it’s probably giving me carpal tunnel, but that’s a whole other post.

The temperature blanket is also coming right along. The last several days have caused the rows to vary wildly in color. That’s the fun of weather in the south. Two days of snow and below freezing temperatures, and then a day of 70° and sunny. I’ll get pictures of it and discuss the details soon.

Any other crochet enthusiasts out there? Do you have fun projects going on? any other beginning learners of crochet or knitting?